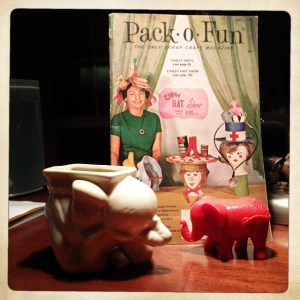 I came across this magazine in my scrap drawer, which holds old calendar pages, magazines, photos, and other paper ephemera I cut up and use in projects. I can’t fathom what possessed me to bring this home, because it’s consistently hideous. Maybe it was tucked into something else I picked up? Or maybe I wanted to gape at it with someone else. Here I am! There you are! Thank you for gaping with me!

I’m thinking this magazine might actually be perfect for the untalented and/or uninspired crafter, because anyone who attempts any of these projects can only come away with increased esteem for their own handiwork and taste.

The feature article is about Crazy Hats. It begins: These hats will never win designers’ awards, but they might bring a prize at a crazy hat show.

You don’t say! Actually, a crazy hat party sounds fun and funny. And I do love the offbeat challenges on Project Runway. But these creations are just grim. They would win first prize at an ugly hat show, no doubt.

The sketches of crazy hats are fairly charming…although one might wonder how it is possible to realize the artist’s vision with the suggested scrap materials: plastic jugs, tissue paper, paper plates, foam trays, etc. Let’s zoom in on a gem: the pizza hat. 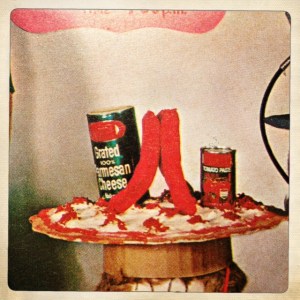 The thing that perplexes me most about the pizza hat is the execution. What is UP with that Eiffel tower of pepperoni in the center? It is made of red socks. Recycled socks. Think about that for a moment. Appetizing? Not so much.

The article helpfully concludes with verses describing some of the fashionable creations which your event’s emcee can read aloud during the parade of hats. (forgive the poor meter)

Despite the fact she’s tired/Mom will join right in the fun/This hat will speak for her/And say, “Tennis, anyone?”

Pack-o-Fun certainly lives up to its name — at least the packed part. There are many other projects: painted cutting boards, sock pincushions, Foam Egg Cartons, skit suggestions, plastic jewelry, plastic cleanser bottle projects, macaroni and seed art patterns, handy hints, and a Q & A section called Leader’s Page. I found some of the questions charmingly specific.

Please give me directions for making a footstool from large fruit juice cans.

How can I use a number of the enclosed soft sponges in projects?

I have quite a few red plastic milk bottle caps, and have no idea of what to do with them. Can you help me out? (Editor Edna Clapper suggests lapel pins, doll house dishes, belts, pin cushions, shade pulls, and table decoration bases).

The back of the magazine features classified ads for craft patterns, sales agents, fund raisers, and pen pals! Pages and pages of names, addresses, and interests of people who are seeking pen pals. I remember dreaming of a pen pal when I was little. I think I had a couple false starts. It is interesting how very far this is from today’s concept of protecting personal information. Also, I am a little bit tempted to try and look up some of the kids seeking pen-pals. Wouldn’t it be funny if I could track down any of them and get a letter back? Google rabbit hole, here I come!

So the thing I keep wondering about is this: forty years from now, will people look at currently popular crafts and think they are hideous? Is the evolution of craftiness more about taste or skill? Taste has to be a big factor. If you think about gorgeous primitive art or the charming crafts (paint, decals, embroidery) of the thirties and forties, it makes you wonder about the seventies…why was everything so ugly? Did the preponderance of plastic have anything to do with it? I don’t think it was exclusively an American pitfall, as I have old magazines from Denmark with plenty of ugly seventies projects. Things that make me go hmmmmm…

So: my takeaways from this week’s vintage advice: 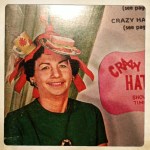 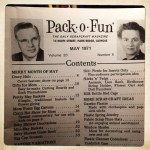 the Clappers sure look fun, don’t they? 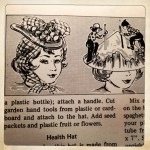 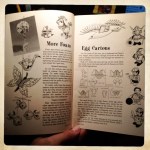 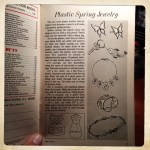 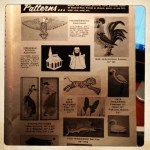 pattersn for seeds and string! and pasta! 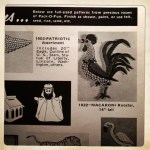 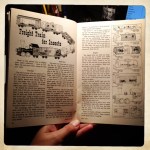 confession time: this insect train would have appealed to me when I was little 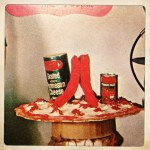 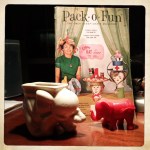 see what I did there? pachyderms? pack-o-fun?