Newala Kisimani I have always loved a cheerful car. There are a couple in Ann Arbor with plastic dinosaurs and toys all over them. There are also some spectacular custom paint jobs. When we lived in Milan, there was an awesome, junky ice cream truck that was painted solid pink and had zebra fur lining. It played the Pink Panther theme song as it prowled the neighborhood in case of treat-loving street urchins. Best ice cream truck EVER!

Pregabalin 150mg buy I don’t exactly know what cheers me so about a well-appointed or obviously beloved car…maybe it has something to do with the fact that I spend a lot of time in mine. Less so since I now have 1.5 young drivers in the household, but there were years when both kids were doing travel soccer when I practically lived in my car.

buy prednisone for pets My family had a lot of kooky cars over the years. My dad was quite fond of Volkswagens. Nothing wrong with that, but there was an odd disconnect between the size of cars we drove and the size of our family. When my mom dropped us off at school late, kids in the classrooms would stand at the window and point and laugh as we did our version of the clown car routine.

The tightest squeeze ever was a Christmas party trip to Toledo when my dad worked at Owens Corning. Dad (6′ 2″ tall) drove, mom (7 months pregnant) rode shotgun. In the back seat were six kids, the biggest of us on the bottom. There was no need for heat or safety restraints, as we had nowhere to go. We were our own airbags. (Toledo is about a 1-hour drive from Ann Arbor, in case you are doing the math.) 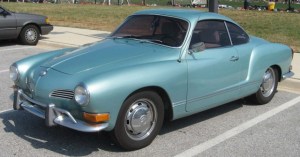 ours were not nearly this pristine, but still adorable

A car does not have to be expensive or new or even very fancy to be cheerful. Some of my favorite happy cars sport home-grown paint jobs. When I was around 10, my dad had an old green ’62 or ’63 Chevy pickup. It was quite beat-up and smoky and we used it mostly to haul stuff to the dump. One day something possessed me to paint a heart on the driver’s door with my parents names or initials in the middle of it with brown paint. Perhaps they had been fighting and I wanted them to stop, or perhaps I was just seized by the intense romanticism that occasionally possesses me to this day. In any case, Dad handled it with aplomb. As I looked at him looking at it, it struck me that it may have been a bad idea, but he didn’t rant or rave. A somewhat wincing chuckle was all I recall. (When asked, Dad said it made him smile. Time heals all wounds. 😉 )

My current joymobile, I must confess, is new and shiny, a Mini Cooper Countryman named Maybelline. I love her to bits. She’s sporty, fun to drive, and gets 30 miles to the gallon! She also hold a lot of stuff, more than anyone can believe. I don’t plan to outfit her with long eyelashes or a fake wind-up key, but I appreciate drivers who do accessorize their rides, as well as those who take great care of theirs. We also recently adopted a cherry VW bug which awaits a little restoration with the original parts and such procured by the previous owner.

So back to the car that inspired this post…I was having a rough day earlier this week and I was actively looking for something to cheer me up as I finished my errands. I was thinking about a cupcake, but then I came upon this gem: 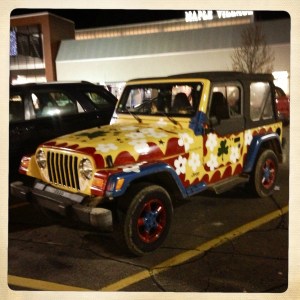 Hand-painted, great colors. The inside was fancied up, too! Stickers and figurines on the dashboard. I couldn’t get a good picture of the backseat, but that confirmed that the car owner was someone who shares my vintage affinities…the seat was covered by an old chenille bedspread and on the seat rested a vintage train case, one of my favorite gifts for travelers.

It surely cheered me. 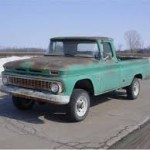 pretty close match to our chevy 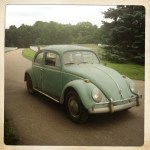 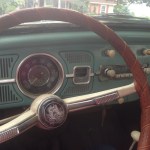 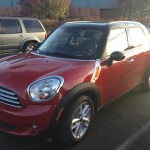 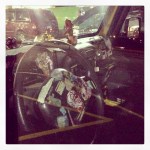 inside of that jeep 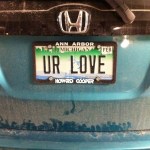